THE SHOCKWAVES.....Trash blast from the past ! By Dan Whaley.

Now here's a thing, this whole 80's, UK 'Trash' scene thing has started throwing up some remarkable material since we've been digging past the more obvious suspects such as The Sting Rays, Tall Boys, Milkshakes, The Vibes, Surfadelics & even The Cannibals. And by far one of the most interesting to have come crawling out from some dark and dingey garage are The Shockwaves, not only is their sound fair amazing and deserving of a far greater audience but they all went on to significantly contribute to the various burgeoning scenes that came in the wake of the late 80's.
Dan Whaley, upside down, left handed Bassist extraordinaire, late of The Diaboliks and sometime Bassmeister for The Dustophonics gives us the inside tale of The Shockwaves of which he was a founding member...read on and enjoy !

It all started in leafy West Kent sometime back in 1984: a bunch of teenagers with little or no interest in the mainstream music of their generation, and brought up instead on a diet of punk, rock'n'roll, garage and noise decided to pick up instruments and give it a bash themselves. Following a few personnel changes (hello and indeed goodbye Al Cormack and Andy Crane), and bandname changes (by summer 84 we'd settled on The Untold), the line-up coalesced around Mark on vocals and guitar, Stick on other guitar, me on bass and Jon on drums.
Rehearsal tapes from the time (usually recorded round at a parents' house with guitars, bass and vocal and drum mics all going through a hifi system or home organ, with the unsurprising detrimental effects on said "amplification" equipment) suggest we were quite heavily influenced by The Fall around then.

By late 1985 a final name change meant we were now The Shockwaves, and the influences had shifted more towards the 80s trash scene, especially The Vibes & The Purple Things, whose vocal stylings, filthy guitar tone, jazz-inflected rhythms and high-rise barnets we joyfully appropriated.

By early 86, we had amassed a set, roughly half of which were originals and the other half covers, and were ready to play out first gig. The top local venue of the time was The Cavern, beneath Sevenoaks cinema, where we were booked to play supporting local public school rockabilly combo The Memphis Rockets. This being my first ever time on stage, I was nervous as hell, and things looked far from rosy when I slung my bass over my shoulder and the strap promptly broke. This was followed up by me picking up a can of beer with trembling hands, popping it open, and getting a jet of foam square in the mush.

However, it all got better from that point on, no doubt helped by the fact that all our mates were there to cheer us on for our first gig. What also helped was the 2 narcissistic guitarists from the Memphis Rockets decided to engage in onstage fisticuffs as each thought the other was trying to upstage him. The entire audience, and for that matter the Rockets' bass player (top chap Gav Smith, nowadays with The Urban Voodoo Machine) and drummer quite rightly derided these two preening buffoons, and totally unprompted by us, starting chanting "Shockwaves! Shockwaves!" which succeeded in making them even more irate.

Following another gig at Kemsing's St Edith's Hall (bizarrely I've been back there recently to the folk club there...), we decided we could do with beefing up the guitar sound, so we drafted in Clive from pals The Dangerman, and Mark concentrated on singing. A recently unearthed bootleg of the first gig as a 5 piece from 23rd May, 1986, back at the Cavern, gives a good, and frankly quite surprising idea of how tight we were by that point. It also helped to remind me which covers were in the set around then (Courageous Cat, Joe 90, Brand New Cadillac (played twice, once fast and once slow, I Hear Noises and Scratch My Back from the Vibes' Inner Wardrobes... ep).

After a few more gigs that summer (one of which was supporting mod combo Contrast featuring future Clique guitarist Jon Paul Harper) we went into a tiny recording studio in East Peckham and recorded 4 tracks: 3 originals and another Vibes cover, this time Looking in a Mirror from their Peel Session. Naive kiddies that we were, we didn't even come away with a 1/4" mixdown - all we had was a cassette copy of the mixdown, which amazingly sounds not bad (and has now been backed up digitally for posterity). 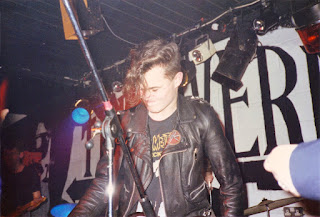 Me, before I worked out that if you don't pull a face when you hit a bum note everyone just assumes it's jazz. Either that or I've stubbed my toe.
Following a particularly raucous gig at the Green Hut in Tonbridge that autumn (by the end of the set both Jon and Mark had jumped off stage and were getting busy with the punters down the front), Stick decided he'd had enough and so hung up his guitar. (Actually, he left it round my house, and after 18 months with him showing no interest in having it back, I flogged it). 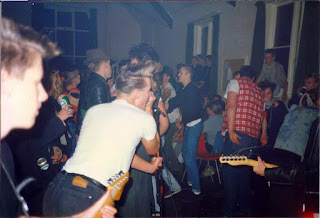 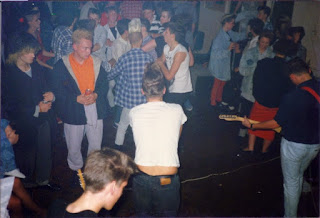 Stick, Mark & Clive, and in orange shirt a very bored looking Paul Hartnoll, a year before he'd play keyboards on a Shockwaves recording session (see below), and a couple of years before he'd conquer the dance music world with Orbital.

The first gig back as a 4 piece was supporting The Guana Batz at the Angel Centre, on 7th March, 1987. I was still at school in Tonbridge then, so had the slightly bizarre experience of playing a set of hi-octane rock'n'roll on the Saturday, then having a PE lesson in the same place 3 days later. This gig was recorded, although the tape appears to be lost, but I do remember in a moment of silence between songs one of the Batz fans, hollering "Ffffaaahhhrrrkkk Orrrffff!", displaying that broad minded attitude for which psychobillies are so well known.

Also around this time we started venturing up into London, playing at some of Mike Spenser's legendary trash nights downstairs at The Clarendon. As well as playing with some great bands, like Folkestone's mighty Green Hornets (not to be confused with the equally excellent Portsmouth combo with the same name), this led to Mike offering to put out a Shockwaves record. We'd recently been back into the studio in East Peckham and recorded 4 new songs, all originals (and had remembered to come away from this session with a 1/4" tape) which gave an indication of how the sound was getting tighter and dirtier. Following a summer of gigs at the sadly long gone Clarendon and another much missed London garage venue, Finsbury Park's Sir George Robey, we were booked into Cherry Studios in Croydon with Mike's mate, the legendary pistols soundman Dave Goodman.

On 3rd and 4th December, 1987 (I had to bunk off school...) we went into the studio to lay down the tracks for the album on Mike's Hit Records. Dave Goodman was a joy to work with; professional, talented, patient (he may have sighed inwardly when we asked him if we could put the whole of one track through a flanger) and slightly bemused when rather than asking about the Pistols, we bombarded him with questions about the recordings he did with The Sid Presley Experience and The Unholy Trinity. Paul Hartnoll, of orange shirt and bored expression above, came in to lay down some keyboard overdubs on a couple of tracks. I bumped into him a couple of years ago, and whilst reminiscing about the session, he gave a whole spin on the tale that I hadn't really appreciated at the time...

Paul was playing at that time in Noddy & The Satellites with Jon, and had agreed to come and play keys with Jon's other band i.e. us. Both Paul & Jon were warmly embracing the emerging dance music scene; the rest of the band less so (I still fucking hate it), so Paul's recollection was that he wandered into the studio with a bunch of synths, effects and other electronic gizmos to be greeted by the slightly intimidating sight of three large bequiffed and bemused blokes staring at him like he'd walked in with a box full of turds.

Anyway, the end result was a collection of 8 expertly recorded songs that we looked forward to seeing released on vinyl. Alas Mike's label was undergoing a cashflow problem at the time, so the record was temporarily shelved. What we didn't immediately appreciate is that shelving period would be slightly longer than expected (28 years so far, although read on for an unexpected turn of events...)

1988 started with a flurry of gig activity; The Robey again, supporting a band containing ex members of the very excellent Margin of Sanity, Folkestone with The aforementioned Green Hornets, and a hometown gig back at the Cavern in Sevenoaks. Not that we knew it at the time, but that was to be our last gig, as a combination of the usual elements; disappointment at the record shelving, teenage boredom, diverging musical tastes, me moving to Blackpool(!) meant that the band just sort of ground to a halt. However, there was no animosity - circumstances had just changed in our lives, and we are all still good friends now.

Fast forward 19 years to 2007, during which time Jon has had a stint drumming for The Shamen, and then spent many years with Alabama 3 and Clive and I have carried on down the rock'n'roll path, both together (The Charles Napiers, The McDeath trio/DC3) and separately (Clive with the Gene Drayton Unit and JB & The Wolfmen, me with all the other stuff). In fact it was due to the mention I'd made of The Shockwaves on my website that Charlie Spliff, regular Clarendon gig goer and 80s trash fan, got in touch saying he remembered seeing us down there and how much he'd enjoyed our stuff. A man of exquisite taste, clearly, and pressing on the fast forward button once more to 2015, and Charlie S. is launching Trash Wax records with Darren Ross, a label dedicated to releasing lost and forgotten trash obscurities from that golden age. In the pipeline for a Trash Wax release is none other than those Croydon recordings from late 87! Watch this space for further details...

UPDATE : The Shockwaves recordings are being released on CD in late Nov/early Dec 2015.         (to be followed later by a limited vinyl release)