Well, I'm far from being Jack White's number 1 fan as I don't even like The White Stripes and could never understand what all the Hoo Hah was about regarding them...But I have to admit, he's put his money where his mouth is and has done something about an issue which is close to his heart and which he's obviously very passionate about, not only has he opened a Third Man Record Store in Detroit (I believe) but he is due to bring a substantial pressing plant (also Third Man) online any day now...Hat's off to you Dude !....damn sight more real than buying a yacht or a small island in The Carribean !

Squoodge Records out of Berlin celebrated their 10th anniversary this year in splendid style by releasing a series of (very) limited 7"s via the Squoodge record club, the final 2 singles turned up this week and what a pair of beauties they are ! The last to be released will probably send all of the Billy Childish fanatics into some form of collective frenzy as it's the Pop Rivets 'John Peel Session' from 29th Jan 1980...A beautiful item I'll admit, pressed in swirled purple vinyl and at just a 100 copies, it's sure that an example or 2 will no doubt appear on Ebay fetching silly money at some point. Another in the series that will have collectors salivating all over the place is the Marcel Bontempi 7", again a lovely, swirled vinyl edition of a 100, numbered copies featuring 2 previously unheard tracks, 'Mambo Jazz' with 'My Father's Grave on the flipside....very nice indeed. Other releases in the series saw Trixie Trainwreck paired with Rev Beatman, Bloodshot Bill had a release to himself as did Bill Fadden & The Dangerous curves (more news about Bill Fadden later) and the 7" from Fia Sco & The Majestics cetainly was a new one on me, pleasantly so....The other releases were by King Salami, The Laser Mutants, Gerritt & The RnR Stalinists, Travis O'Neill, Chris Almoada, Babe Miller & His Tear Droppin' Fools....A decent clutch of very desirable vinyl by anyones standards ! 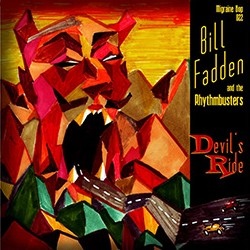 As I mentioned there a little earlier, news that Bill Fadden and The Rhythmbusters were calling it a day and hanging up the instruments was put out over social media. Bill, as some of you know, was one of Marcel Bontempi's backing musicians when MB appeared in the UK and long before that he spent a couple of years as guitarist in The Go Go Cult. During his time with The Rhythmbusters they released a bunch of great 7"s for Migraine & Squoodge all of which are well tracking down incidently....Whatever comes next ? I'm sure it'll be well catching.


It's also been a bit of a bumper year for Hound Gawd Records too, they -rereleased the classic debut album 'Lysergic Emanations' by The Fuzztones, with half the pressing housed in the UK released sleeve and the other half in the US released version. Some of them were coloured vinyl (Slime green, obviously) and all come with a nice Fuzztones logo poster....hard to believe that it's been 30 years since this first came out....I remember quite clearly seeing them as the support to The Damned at Portsmouth guildhall....was rather taken by them at the time too ! Also out on vinyl was the Legendary Shackshakers album 'Cockledoodledon't'...class album which had only ever been available on CD upto this point....

Now, here's a thing....If you get Matt Verta-Ray (Speedball Baby & Heavy Trash) to produce a power trio which includes The Cramps last drummer 'Jungle' Jim Chandler....something pretty interesting is going to happen ! And you can take it from me that The Twin Guns album is fair awesome ! Called 'The Last Picture Show' it's a hard one to nail into any pigeon hole...There's a bit of early Gallon Drunk in there, a bit of late era Gun Club and they cover 'Harlem Nocturne' a favourite of mine (the version by The 5678's), folk who like The Flaming Stars would love this and for sure a wee nod to The Cramps in parts....can't say I'm overwhelmed by all of the vocals but it's a minor detail.     Here's the promo vid for the album :  https://www.youtube.com/watch?v=XRDHYCxw3UM

Unless you've been asleep for most of this year, well, since about May...you'll have noticed that we've gotten ourselves into the record releasing business (Huzzah !) but it hasn't gone anywhere near as smoothly as we'd imagined (No shit, I hear)...But we still managed 4 LPs, a 7" and a CD ! Our latest release The Shockwaves 'No Way In, No Way Out' which should have been with us a couple of weeks ago still hasn't materialised so no surprises there as the factories have only managed 1 (one) delivery that was 'almost' on time ! So our last release was basically those Trashtastic Gooners from Reading (UK) The Go Go Cult ! If you haven't got this yet, I'd encourage you to asap as it's really rather good and not only that, we got Marcel Bontempi to do the artwork so it's nice looking too ! As it's pretty much pointless trying to do an orderly schedule, we have adopted the approach of 'It gets here, when it gets here ! So in no particular order we have for your delectation in 2016, the following, 12" EP 'Feline Frenzy' Marcel Bontempi, CD 'No Way In, No Way Out' The Shockwaves, LP 'Spooky Hook' Messer Chups, MLP 'The GooGoo Muck Sessions' The Raymen, LP The X-Men Vs The Vibes, LP 'Into The Syntax Era' The Sine Waves, LP or CD The Bugs & The Halflings, 7" Charm Bag, 12" 'Spider Baby' Vince Ripper and a heap more which are currently under wraps ! Just keep your eyes peeled !

Last year we had a bit of a spring break in Spain at the MUNSTER RAVING LOONY PARTY and it was a ball, yep ! We got off our faces, we were at times desperately drunk, we saw some great bands and met lots of lovely people...so we're heading back at the end of April for what is to my mind one of the best 'meets' / 'minifests' around, with no further ado here's what's on the menu this time ! In no order whatsoever : Jack Oblivion, The Sick Rose, DeadElvis, The Mobbs, The Mokkers, The Morlocks, Sex Crime, Muck & The Mires (Looks like this years preferred letter is 'M' for bands names !) Thee Gravemen and headlining the whole shebang....The one and only Leadfoot Tea !


Most of the stuff mentioned on these pages is available for a few schillings so don't forget to go and buy some records (stock items) here : www.trashwax.com
And here for one offs, OOP stuff and expensive bits : www.discogs.com/seller/Darrenross

Have fun and Stay Sick peeps !
Posted by Unknown at 15:29