The Cramps......Budkon (Russian) Flexi discs and other news.

Firstly, my best wishes for the new year and I hope that everyone has a Crackin' 2016 !

Thought that I'd kick off the new year with a little piece that I'd been meaning to do for ages. When someone thinks about collecting records, and in this sense I mean Cramps releases, for most folk, Russia isn't an area that springs immediately to mind for nabbing rarities and it's true enough to say that actual vinyl releases of interest to me would be nigh on inexistent. But....in the late 80's and early 90's (and long before then too) the Russian company BUDKON were producing flexi discs on an industrial scale, churning out everything from The Osmonds to Frank Zappa and yes, even The Cramps.

It's virtually impossible to guage the quantities that these flexis were pressed in, and I'd be very surprised if they were manufactured in runs of more than a thousand copies, in all likelyhood you'd be talking high 100's. On the thorny subject of copyright, first you need to have copyright and intellectual property legislation to protect the works of artists, if this isn't in place, you can't break a law that doesn't exist ! Only having  heard a couple of these I can safely say that sound quality was not of over-riding importance and probably came from cassette recordings of the albums.


Soviet era Russia must have been an interesting place albeit a difficult one to imagine in the context of today, they had their underground scenes, as did most of the soviet bloc countries (run out the tired cliches of blue jeans and Dr Martens being bartered for in downtown Moscow and the like) and what they did have was a thriving trade in copied cassettes/tapes. In many cases the more obscure/indie stuff was copied direct from various European radio broadcasts before copies of albums could be tracked down and traded....Vive le Mix Tape ! 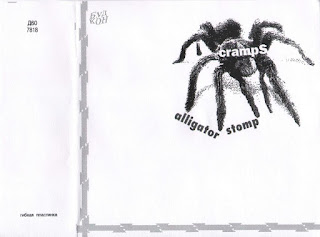 What we do know of the Budkon releases is that some of them came out in various colours, were 6" by 6" uncut square pressings and came with some pretty awful artwork if it can be called that ? There are at least 26 different flexis from Russia as well as a handful of postcard flexis from Poland, all of which are illustrated in the excellent mini-book 'CRAMPED' which was published by French record label 'KIZMIAZ' (Google them as I'm not joking). Now as rare as they are, some of them turn up occasionally on E(vil)-Bay and there are actually a couple here : www.songsthelordtaughtus.com

And while on the subject of Russian releases, we heard over Christmas of yet another boot either due out or possibly even out already although I doubt this as the folk we've dealt with over there don't have it yet. It's from the same source as the fabulous Real Mens Guts LP which came out last year and so if it's anywhere near the quality of that I'm on the list. Haven't heard any of the tracks that are on it yet or even what it is exactly apart from that it's recordings from 1986 in England (A Date with Elvis Tour ?) but the cover looks great if that's anything to go by. Once it surfaces I'll be all over it like a rash but don't hold your breath as the last time proved a nightmare with the good people at the customs and import admin...Anyway, soon as I know more I'll get a post up.