It's been a great month for record buying I must say, dozens of way cool releases and discoveries from far and wide, including a UK Cramps LP (Unofficial ?) release, one from Russia, two 10" LPs of the classic, original Meteors line up (Pre-In Heaven too), three class 7"s from Canada's Rockin' label, more one sided Rockabilly Dementia from German label OHA Recs, a new Smoggers LP and the long awaited Almon Loos LP on Sleazy to name but a few........Oh, and Record Store Day happened......literally a shed load of stuff !

Not sure on the legitimacy of these releases coming out of The UK & Germany, my understanding of the situation is that if the gig had been broadcast outside of the UK & EU then it isn't subject to copyright and publishing legislation (Anyone feel like making a precision, please do so). This is a neat item but only 8 tracks so more of a mini album, coloured vinyl, nice insert and limited to a 1000 copies (so not exactly a future mega rarity). The downside is that as this was touted as an official Record Store Day release, it actually appeared on EvilBay the same day at £50.00 ! now that's profiteering !

Equally great (if not better) is the Russian release of 'The King Is Back' from the CSR folk, lovely artwork, quality sleeve, green vinyl and at just 300 copies this'll be well saught after, contents wise, all the tracks are taken from sessions recorded during the UK leg of the 1986 'A Date With Elvis' tour, pretty fine quality and there's even Lux telling a joke on it. It's a great album and a welcome addition in my collection, not a shabby thrown together thing at all...it seems that the folk behind all the unofficial Cramps releases over the last couple of years,  Coast To Coast, Weekend On Mars, Club 57 et al, at least make an effort, the days of a photocopy page stuck on a generic sleeve seem to be long gone thank fuck and the sound quality overall can be pretty amazing at times....It's a shame there will never be a 'new' Cramps album released but as a fan and a collector.....I'll carry on buying regardless of the irritation.

Whilst on the subject of The Cramps, their former drummer 'Jungle' Jim Chandler and his band 'Twin Guns' are just going from strength to strength, I spoke about their 3rd album 'The Last Picture Show' previously and I was just a bit thrilled when their 2nd 7" 'Attack Of The Zombie Girls' came out on the fab Canadian label 'Rockin' (when our little supply arrived for the Trash Wax website, they sold out the same day !) a lovely 7" which comes in 3 shades of mixed red/black and mauve. A killer mix of garage, dark overtones and as only expected, there's a nice hint of The Cramps in there too. I'd strongly recommend any of their releases and for the time being they aren't rare, can't see it staying that way for long though.

Another equally cool release on the Rockin' label and probably more in line with the labels name, is the 7" by Australian rockers, The Margraves, 2 sides with competing aproaches 'Guilty' is sleazy, darker slice of 50's trash, a bit like The wailers meet Link Wray while the flip 'Not Guilty' is more upbeat with a touch of modern, neo-rockabilly to it, and not are these releases only hyper limited, they're all quasi unique as the pressings vary the colours, with this one varying somewhere between gold and grey !   The 3rd one, (actually the first release) to date is also a rather snazzy little rocker called 'Crazy, Crazy, Crazy, Crazy' which has a pounding rhythm to it and what seems to me, a little nod to early Levi Dexter but that could be just some of the lyrics....Can't wait for next batch of releases from this class label.

More primitive and seriously cool Rockabilly came out earlier on in April from Olaf Haspel's sub-label (of Migraine Records) called OHA Recs, these are really rather special, not least as they're only pressed in quantities of a 150 pieces and the flipsides are all rip off's of that stunning JJ Cale masterpiece....my personal fave so far has to be the Rookie Finn track 'It Ain't About' and is just so cool you could freeze water with it, opening bars made me think of the start of Weekend On Mars before the echoed vocals kick in, has a very slight tinnyness to it which really lends an authentic feel to it, yep..loving this alright. Not to outdone, the other release, by The Royal Flush 'Moonshine Truck' is a Double Bass driven stomper of a track, the guitar break in the middle is a smidgen too short but if this record doesn't make you twitch you're probably starting to smell !  There's a great sense of urgency in the vocals and the whole thing comes together so well, again, it's more of an authentic approach to Rockabilly rather than a 'produced' sound, like a lot of contemporary stuff out there. I bought a bunch of these and buried them in the garden as I thought it has to be better than any pension scheme out there !.....you just may want to get yourself copies too.

Most folk that have read any part of this blog would have noticed that I like The Cramps, naturally enough but I have more than just a simple appreciation for the classic line-up of Lewis/Fenech/Robertson as The Meteors, I won't bother going into the why's & wherefores of why anything which came after only had limited appeal as it's well trodden territory elsewhere....what I will say is that these guys put the balls into the dogs bollox at the time and I was totally blown away when the UK label Raucous announced that they were releasing 2 (two) 10" mini lps which would be the full recordings made for EMI, way back in November of 1980. Quite some time before the mighty 'In Heaven' was released. 16 tracks in total, each disc has 8 tracks,....some of these tracks (not these recordings) went on to appear on the subsequent release of In Heaven but some them you only ever got on dodgy cassettes sold after, outside at gigs. It's just great to have the likes of 'Domino', 'Red Headed Woman', 'Honey Roll' and 'Love Me' on vinyl at last (even though it came out on CD a few years ago). Even though the vocal duties were split between Fenech & Lewis, it's Fenech that gets the cream on this as he counts 10 tracks whilst Mr Lewis plough through only 6......bit unfair if you ask me, But Hey !...I'm not complaining...... 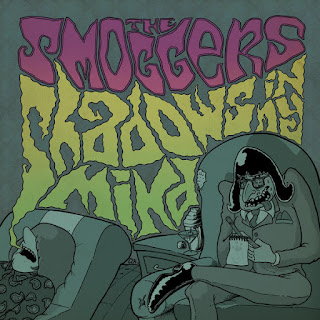 How could we talk about new releases without mentioning the long awaited Soundflat release of The Smoggers 4th album 'Shadows In My Mind' a pure Fuzzfest of gargantuan garage proportions...Fernando and the guys are really riding the crest of the current 60's styled Garage Punk bands and justly so, non-stop touring throughout Europe (UK included), headlining at festivals and bringing their fuzzed out mayhem to hordes of new fans as well as the (slightly) older crowd, to the point that their preceeding album 'Join The Riot' had to be repressed to meet demand, now that's something a lot of bands would love to have happen ! Demented caveman vocals, Fuzz & Farfisa, it's all there and an absolutely killer version of The Lust-O-Rama's Why ?.......right up there alongside the classic Sex Museum album 'Fuzzface' (Incidently just re-isshed by Munster so you don't have to pay €100+ for it anymore !)......Grab a copy of this as it really is one of the best in a very, very long time.


Check out the webstore !  You may just get lucky ! : www.trashwax.com