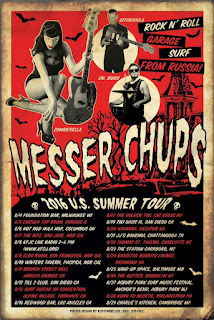 Well, we've been bust bees and managed to get 3 LPs and a couple of singles out ! Taking into account the massive delays at the pressing plants, this is no mean feat ! First out of the traps was the vinyl release of Messer Chups latest album 'Spooky Hook' 16 tracks of blistering Rockabilly influenced Surf...A real Killer Diller of an LP, the 1st 100 copies were in red vinyl with 400 in standard black vinyl. Their sound has really taken on a more 'Rockabilly' feel to it on this than on previous releases but it's not a retro sound, Oleg's style of guitar play brings a broader scope to the overall sound and to my mind is quite brilliant...There really isn't anything quite like Messer Chups out there at present !
They also spent the whole of August touring the USA, this tour was long overdue and they've now a whole new bunch of fans, I think that they will be going back fairly soon...all reports that came back said it was a pretty sensational reception....Much deserved and as is only normal ! 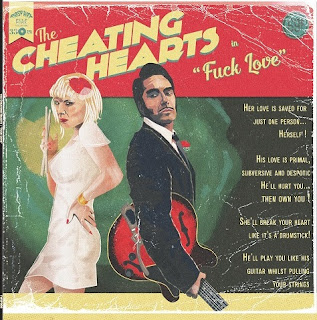 Next out was the Ltd LP (Just 300 copies) by Hamburg's stunning Trash duo, The Cheating Hearts and even if I say so myself, this is one blistering slice of vinyl...one our best so far, it was completely remastered in analogue by our good buddy Mondosean and bears little or resemblence to the CD release. There's no way you'd believe there are only two of them when you listen to this, all their own material too with not a cover version in sight...Love it !   Sleeve is great too, done by the Voodoo Scribbler himself Chris 'Sick' Moore....And as it says on the tin (Well, sleeve) it's 'Primitive Trash R'n'R ! ! !
Whatever you do, don't think that it's anything like the White Stripes...it pisses all over that....Go on, treat yourself while you still can ! 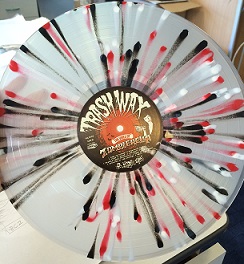 The last chunk of vinyl we unleashed on an unsuspecting public was a bit of a showcase for Zombierella, an absolutely, stonkingly beautiful package (the LP, not the lady in question although she is too) a compilation on which every track features the vocal talents of Svetty, Messer Chups being a primarily instrumental band, these a far and few between normally...with a fantastic sleeve designed by New York based 'Solrac' and the 1st 100 copies coming on spattered vinyl reflecting the sleeve colours...it really is a piece of art of which I'm quite enamoured by.  Of the 16 tracks on the LP, 6 of them are taken from The Bonecollectors CD only release entitled Bone to Bone, this album was their foray into rockabilly without any surf...and features more of Zombierella's vocals.


Here's a video of The Bonecollectors for the track 'Swamp Farming' which doesn't appear of 'Voice of Zombierella'....(There are very few Spattered copies left 20.10.2016 and if you're reading this in 2017 ?...forget it). 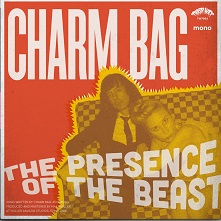 The first of our 2 7" releases to appear was The Smoggers and Charm Bag split single although really it's not a split as it's the same guys...almost, Charm Bag is Fernando and Ana of The Smoggers playing a much more primitive style. If 60's Garage Punk is your thing, they currently don't come much better than Valencia (Spain) based The Smoggers who've 5 LPs and a whole bunch of singles out on European labels such as German garage stalwarts Soundflat...Snotty, scuzzy Farfisa and Fuzz is their philosophy. While their alter ego...Chram Bag give in to the primal sounds of The Gories, The Cramps, Link Wray and the dark side of The Birthday Party (I know which I prefere)....2 blinding tracks and the 1st 100 copies on Orange vinyl no less !


And lastly but by no means least(ly) and this beauty only turned up yeasterday ! (19.10.16) is the party record of the year ! Oh! Gunquit....The toast of London and fun people extraordinaire. This is a heady mixture of Trashy Garage, Surfabilly and a serious party attitude, can't really label it per se but think very early Fleshtones mixed with a bit of Detroit Cobras and a dash of The Delmonas. Their 3rd 7" outing following on from last years Dirty Water album release.....1st 100 copies on a rather lovely shade of green !......You can hear the flipside here :


Now go and buy some records so we can put even more out (Please and Thank You)....There's a lot more to come !

You can get all the releases and a whole lot more very cool stuff from the website, just click on the link : www.trashwax.com

And if that's not enough ? You can head here where we've now got more than 1500 references up, most at reasonable prices too ! : https://www.discogs.com/seller/Darrenross