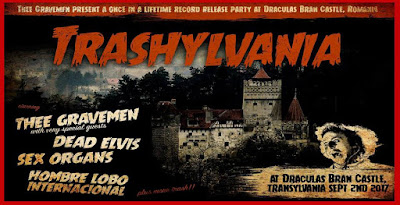 The 1st weekend of September (2017) saw a hundred or so dedicated Trash/Garage fans assemble in the small Romanian town of Bran for a very momentous occasion, the very first 'Rock' gig to ever be held in Bran Castle aka Dracula's Castle ! T'was the brainchild of Daz Trash of Thee Gravemen and organiser of the annual Munster Raving Loony party and what an event it was !

Numbers of folk came from all over Europe by plane, car and train much to the surprise of the locals although I'm not quite sure just who were the more surprised to be honest, us or them ?  4 of us travelled to Bucarest, Romania from Gatwick in the UK, arriving at the absurd time of 3.30am before taking a train ride through the legendary Carpathian mountains to Brasov where the final leg to Bran was completed by a torturous taxi ride, torturous only in the sense that the taxi driver was very proud of his local music and insisted on subjecting us to it by constant channel hopping...Between the Polkas, the Electro and some particularly nasty Europop we were very, very relieved to arrive. The town of Bran really isn't very large, just one principal road but it does have a market square at the bottom of the castle grounds which has the most entertaining selection of Drac-Tat I've ever seen and a haunted house experience...As if being in the shadow of Vlad's country retreat wasn't enough.

The first night basically involved taking over the terrace area of the 2 closest hotels where they kindly left us to ourselves to spin some tunes and drink the bar dry of their draft beer and all the vodka as folk on who'd arrived on later flights turned up with tales of horrifying taxi journeys...Road safety is not a top priority it must be said. What do you do when you go to your hotel room in Transylvania and find someone asleep in the middle of the day ?  Yeah, my thoughts exactly...Was going to stake him but it was Neil, one half of the demented Stay Sick duo from Brighton, although I did open the curtains to expose him to a bit of sunlight and he didn't spontaneously burst to into flames...One can never be too sure in this part of the world !
We did the obligatory daytime tour of Drac's shack with all the official touristy stuff, the castle itself isn't a huge thing but it is very atmospheric, with lots of creaky stairs, narrow passages, suits of armour and a torture chamber !!!

When the evening eventually kicked off there was a slight change to the running order of things as due to a bit of a cultural misunderstanding, The Sex Organs were asked by the castle director not to play, something to do with the idea of a 7ft penis and a 6ft fanny jumping around not being in the best of taste, although the spiked butt plugs in the public display and the idea of sticking an 8ft stake up someones arse is perfectly ok...Anyway, the evening was saved as Patrice Picard, long standing Cannibal (the group, not his dining habits) stood in for a few tunes and very good he was too.
The stage had been built in the courtyard of the castle, the lights had been set up and someone kindly switched on the smoke machine as the sun went down over the Carpathian mountains just as Patrice took to the stage...He kind of reminded me of Zacherley !

After the short but sweet set by Patrice, the stage was changed and it was the turn of Hombre Lobo Internacional to wow us with his manic one man band and bloody hell...It sounded as if he had a full band up there with him ! Complete with a very cool Wolfman head piece, sound was awesome and the crowd was rockin', the highlight of his set for me personally  was his truly warped and demented take on The Isley Bros classic 'Shout'...Had me and the crowd with the opening bars and a bit of wolfy growl. For those of you that don't know him, he's from Spain, he has an a LP and a couple of EPs out and they are well worth getting your grubby paws on...Pure trashy R'n'R.....Loved it.

Didn't have to wait long after HLI had finished for the next act, as he's a one man band too...Albeit unique in this world ! Yeah...The one and only DEADELVIS....drumroll.....Ah, this guy is amazing and had the crowd right where he wanted them. The Dead Dude Rocks for sure, his dispensing of pearls of wisdom and relationship advice between tunes was hilarious and the place heaved when those immortal words 'Papa Ooh Mow Mow' broke from his somewhat mouldy lips...I'm not giving too much away in terms of the songs as the whole event was recorded and will be released as an LP, hopefully in the coming months, needless to say though, they don't come much better in terms of out there craziness than DeadElvis ! And he did 'Leave The Castle'.......

Last up (Where did the time go ?) were Thee Gravemen and kudos to Daz for having organised everything...A blistering set with Lee pulling some gnarly riffs while Daz pounded out class voodoo rhythms on the drums and oh so appropriate. Many of the folk in the crowd had come in costume and it was a real gas to see Nosferatu digging the sounds while wolfman and Apeman were getting down, Vampires a Go Go and even a Basil Rathbone Van Helsing! Must be said though, some of them present didn't even need disguises !
Once Thee Gravemen had finshed up and everyone was ushered from the castle by Igor out into the castle grounds, the party continued well into the night...Almost 'til dawn as there were guest DJ's from all parts, including Neil from Stay Sick, Pete Slovenly and something, that by all accounts, looked like a Norwegian Mrs Brown (go check the posts on various social media sites).......A truly remarkable gig, in an incredible location. A once in a lifetime experience ?.....We'll just have to wait and see !