Welcome to my little corner in the garbage can of life.....

Lists, biased reviews and the odd rant no doubt, but hopefully the occasional nugget which proves of interest to someone, somewhere !

By means of a bit of an introduction and to set the tone so to speak, I love The Cramps and I'm a big fan of Beatman Zeller, Milkshakes era Billy Childish, the various Nigel Lewis incarnations (Early Meteors, Tall Boys and his thing with the Zorchmen). 60's punk, the snarling, snotty stuff, not the wimpy, folk infused, hippy dippy drivel....I suppose in the main, that desperate, driving Texas punk sound (though not exclusively Texan)....And my first love, primal, amphetamine fuelled, moonshine addled Rockabilly.

As a teenager growing up in England during the 80's I was always broke, not because I didn't have any money but because my pockets were serruptiously emptied indirectly by the likes of Big Beat & Ace (Ted Carroll), Crypt (Tim Warren), Media Burn (Stan Brennan) as well as a plethora of smaller but none the less deserving labels every Saturday on the weekly pilgrimage to the city centre record shops.....if only it had stopped there ! Unfortunately, the world of mail order records was full of 'must haves' and so further depleted any financial reserves that may have been squirrelled away in the post office (Hard to believe but they still had problems granting bank accounts to mere mortals then) the arrival of JD Martignon's Midnight Records catalogue was always met with a mix of trepidation, pure lust and a looming sense of abject poverty !........Before the wonderous arrival of the interweb, email, paypal and next day (ho ho ho, not where I live, matey) delivery. Mail order consisted of compiling a 'wants list' carefully garnered from reviews in the likes of Lindsay Hutton's 'The Next Big Thing', 'Sounds', 'The Bob' and 'Goldmine' as well as trying to recall 'that band' from the John Peel show....next it was off to the local post office, cash in hand ready to convert into the all important International money order (Dreaded IMO) and stack of International response coupons (Obligatory IRCs). With list of records desired along with the inevitable 'alternatives' in case of stock depletion and not forgetting the recurring credit note from last order all safely enveloped and taped, it was then sent registered post to an exotic destination such as New York, Paris or Stockholm ! 6 weeks to 2 months (longer on certain occasions) after, the package would arrive, as surface mail would allow you another album and 7" at least, compared to airmail........the coveted goodies enclosed rarely failed to please.
All of that is now firmly in the past, so if you're curious about or want to buy anything mentioned in this blog ? You can first check out the band, song or cover version on http://www.youtube.com/ then find out the average cost of the afore mentioned item on any of the auction result sites, then you can look it up on  http://www.discogs.com, buy it there, check out some of the mail order companies I'll list or take your luck on chancers-R-us aka Ebay.

Mostly, this blog will be Cramps related in one way or another but that's far reaching and encompasses a whole lot in the enth degree. So if you're a fan of the UK Trash scene, Screamin' fuzz and farfisa sounds, deranged rockabilly, 60's Punk or the plain deranged but cool......look in occasionally.

A fantastic little item recently acquired deserves a mention and a glowing one at that. It comes in the form of a hard cover 7" format book and includes a 7" EP of Cramps songs and a wonderful fold out family tree of the Cramps. The book itself is an illustrated guide to Cramps bootlegs on vinyl and includes photos of all known (at the time) unofficial releases including those incredibly rare Russian and Polish flexi/postcard records. 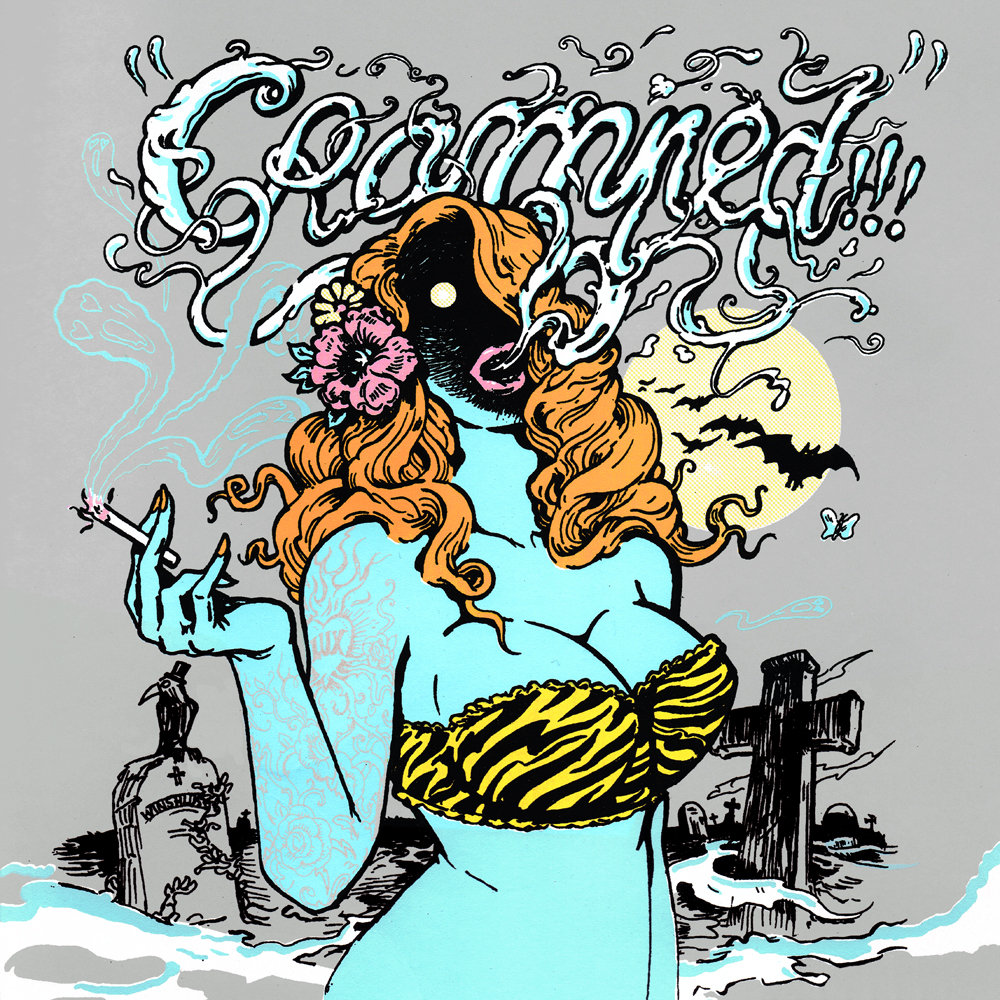