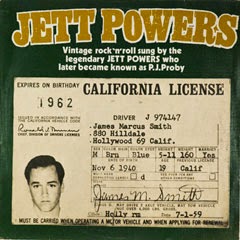 Jett Powers, P.J.Proby, Orville Woods or just plain old Jim Smith.....whichever way you look at the man with as many personas as names? he is definitely a character and a half. Belonging to a bygone era of where it was a game of 'wannabe hit and miss' with the pop industry.....one name and style one week....didn't work ?  No bother, change name, change style and give it another go......2nd rate Elvis to pop crooner in the space of a couple of years......cut off the quiff, grow a bowl cut, quit the USA and move to the UK, get some overtight trousers and scandalise the British public......cool !  Fall out of favour, get drunk for a decade and come round as a re-invented and marginalised cult figure doing punk and post punk covers before hitting the charts as one part of a comeback duet (Marc Almond being the yang to PJ's ying) before disappearing yet again..........some roller coaster ride of a life that !

What's interesting from a Cramps fan's perspective is that as most would be aware of the Cramps taking Jett Powers Go Girl Go and doing their thing with it, Jett Powers as 80's PJ Proby released his version of  Garbageman on Manchester's (UK) Savoy label, Savoy also released a Cramps scrapbook (which is still available (14.06.2014) from them as is the PJ Proby CD 'The Savoy Sessions' and the 12" vinyl of 'Garbageman').     http://www.savoy.abel.co.uk