Oh my.....I really dig this band, a lot !  Hailing from Russia they're off the scale cool and not so unlike The Cramps in many ways, the core duo of the group being Oleg Gitarkin (Guitar) and Zombie Girl/Zombierella (Bass), their rise to cult status has been a slow burn rather than an overnight sensation having been in existence in one form or another since 1999 and going through a few line up changes along the way (Sound familiar ?) their love of 50's & 60's pop kitsch, burlesque, tiki imagery, sci-fi & horror b-movies (check out the use of the Theramin on some of their tracks).
Although more Mosrite and Fender than Gretsch, Rockabilly is a big influence on them as listening to their recent album as The Bonecollectors will show but it's the reverb and twang of Surf which is the overriding influence here, they do it well, very well indeed ! 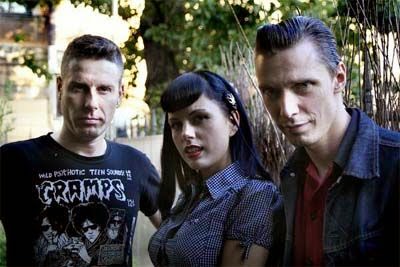 In terms of releases, it's an odd one, some 17 albums and counting, with all but three as CD releases, yep, only 3 album releases on vinyl and their first single due out late summer (2014). Gitaracula Records is the band's label and it's not always easy to get one's grubby hands on them when they come out....so good luck tracking them down.

It would appear that Mr Gitarkin is a somewhat talented chap too, composing movie scores, advert sounds and just check out the dozens of videos that accompany Messer Chups songs on Youtube, all this in addition to touring, recording and running the label....Hats off to you dude.

You can't really talk about the band without giving good copy to Zombierella / Zombie Girl....Wow ! Looks like a younger Bettie Page who has inherited all the best bits from Ivy Rorschach's wardrobe, laying down solid bass lines while looking this good seems effortless to her.