If ever there was to be a qualification in CRAMPOLOGY then I'd hazard a guess that Patrick would presented with an honoury doctorate. If O.C.D. was Obsessive Cramps Disorder then he would be diagnosed as having the condition........You could say that when The Cramps 'wrote' 'I'm Cramped' they had him in mind !.....he's that bad but he's been decent enough to run through his top ten of Cramps 7" bootlegs, here's what he has to say about them........

Well, our man Darren asked me about my top ten Cramps bootlegs 7’’.

I counted 43 different ones on my shelves (I’m missing a few of those recent Greek crap thick ones) , not mentioning different colours, reish of reish, Amnesty international novelties, Polish postards and Russian flexis (which are official tracks sounding like demos from hell, cut at 2 minutes).
I finally chose 5 old ones and 5 ‘new‘ ones, here’s my list.
* 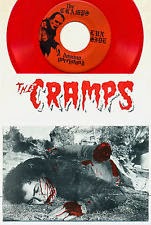 Issued on Not On Label , in the USA in 1986, as I recall (I bought his one and my # 2 'Ohio Box' the same day at a famous record fair in Paris, when it stood near Austerlitz train station), this 4 songs EP is abfab.
The song s here are 'Domino / Nuthin’ But A Gorehoud / Faster Pussycat / Garbageman', soundboard recording from a 17 songs show (it took me years to find the full set) at Adams Ave Theatre, San Diego ; on June 23, 1984.
Originally issued as 475 numbered copies on black vinyl + 475 on red vinyl (mine is # 210), this single has been recently reissued.


The other ones above ain’t in my fave order, just at they come on my notes. 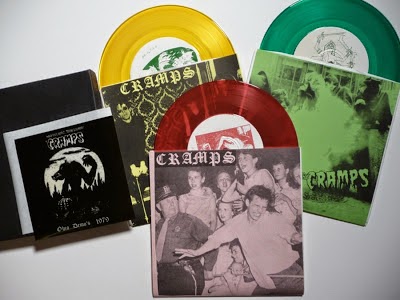 2) Ohio Demo's 1979
Same label as # 1, this one is a singles box (sometimes sold one by one on Ebay). The 3 – red / blue / green - singles from this Lx Chilton session all feature 4 songs each :
- Twist And Shout / All Tore Up / Mystery Plane / TV Set
- Rockin’ Bones / What’s Behind The Mask/ Uranium Rock / Under The Wires
- Teenage Werewolf / Sunglasses After Dark / Jungle Hop / Mad Daddy
There are lotsa reish of this box set on LP with the same name 'Ohio Demos', or 'Wild Psychotic Teen Souds' or 'All Tore Up' 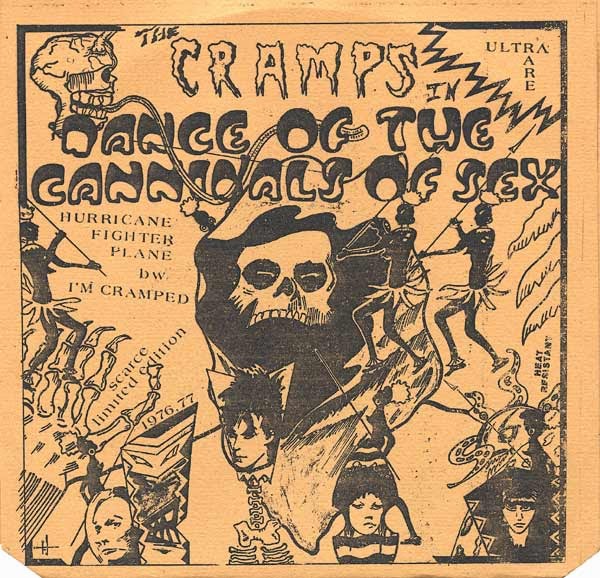 3) Dance Of The Cannibals Of Sex

This one, issued on :Famous Lux label, USA,first come as a brown cardboard sleeve with cut angles in 1984, then appears one or two years later with a red or green sleeve, then with a black one (1990), followed by lotsa more recent reish.
Two songss –  'Hurricane Fighter Plane' (Red Crayola) and 'I’m Cramped' recorded live at Max's Kansas City, January 1977, featuring Miriam Linna on drums. 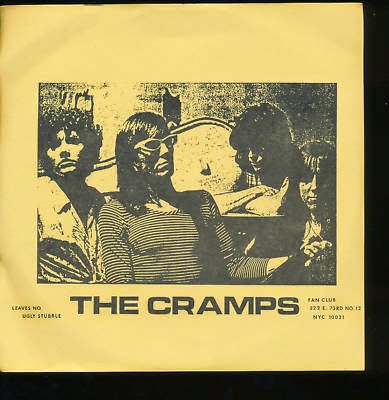 4) Leave No Ugly Stubble
Issued on Fan Club, USA, in 1984, as a 700 ltd edition (mine is 441), this double single features 1976 demos recorded by Richard Robinson at Bell Studio (NY, June 1977) with MiriamLinna (second drummer after Pam palam, Bryan Gregory’s sister).
The tracklist is :
- Don't Eat Stuff Of The Sidewalk / I Was A Teenage Werewolf / Sunglasses After Dark / Love Me
- Domino / What Behind The Mask / I Can't Hardly Stand It / I See You On My TV Set
You can find this on LP issued a few years ago under the name of  '1976 Demo Sessions'. 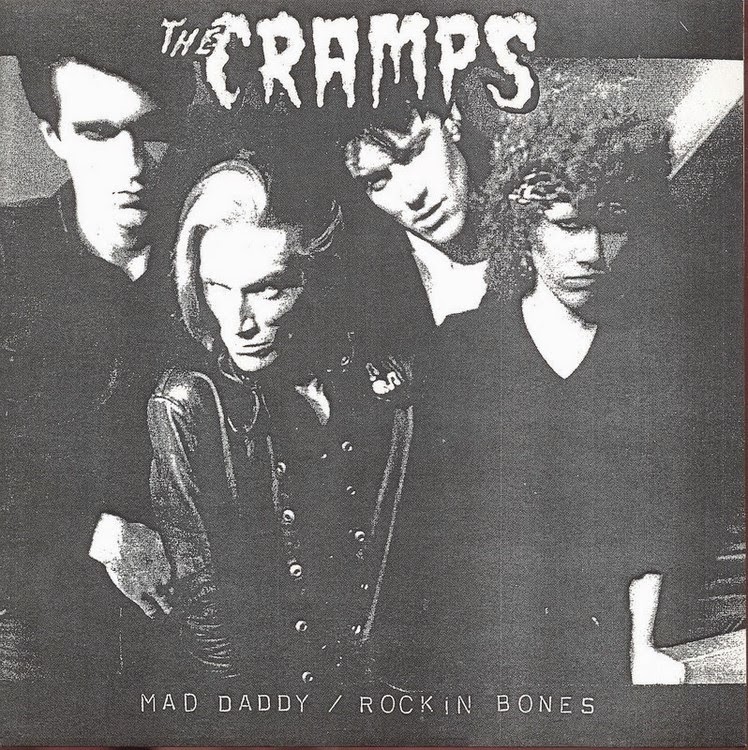 5) Mad Daddy
This one – supposedly sold as a Vinyl record day item –is in fact a boot of what could have been the 3rd (# 667 was deleted too) Vengeance single (# 669), featuring 'Mad Daddy' and 'Rockin’ Bones', both not turning at the right speed (those bootleggers are so lazy, or lacking of imagination …).
This (UK, I guess) single has been issued this year on black vinyl first (300 copies) then orange and transparent (75 each) and there is also a purple vinyl copy that surfaced recently. Are bootleggers now copying official labels, always reissuing the same stuff?

6) A Vicious Cycle
Scatterbrainchild Records, USA 186
The Cramps  'Elvis tribute single', featuring 'Heartbreak Hotel' and 'Do The Clam' (to be reissued with 'Jailhouse Rock' as a bonus one day ? (Just an idea).
Limited to 500 copies on blue or red vinyl. Recorded live at the Hammersmith Odeon, March 16, 1986.
This cramps line-up feature Fur Dixon on bass. 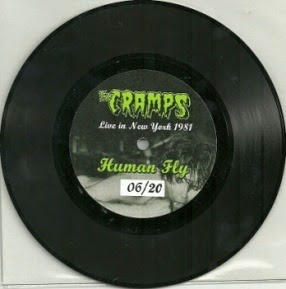 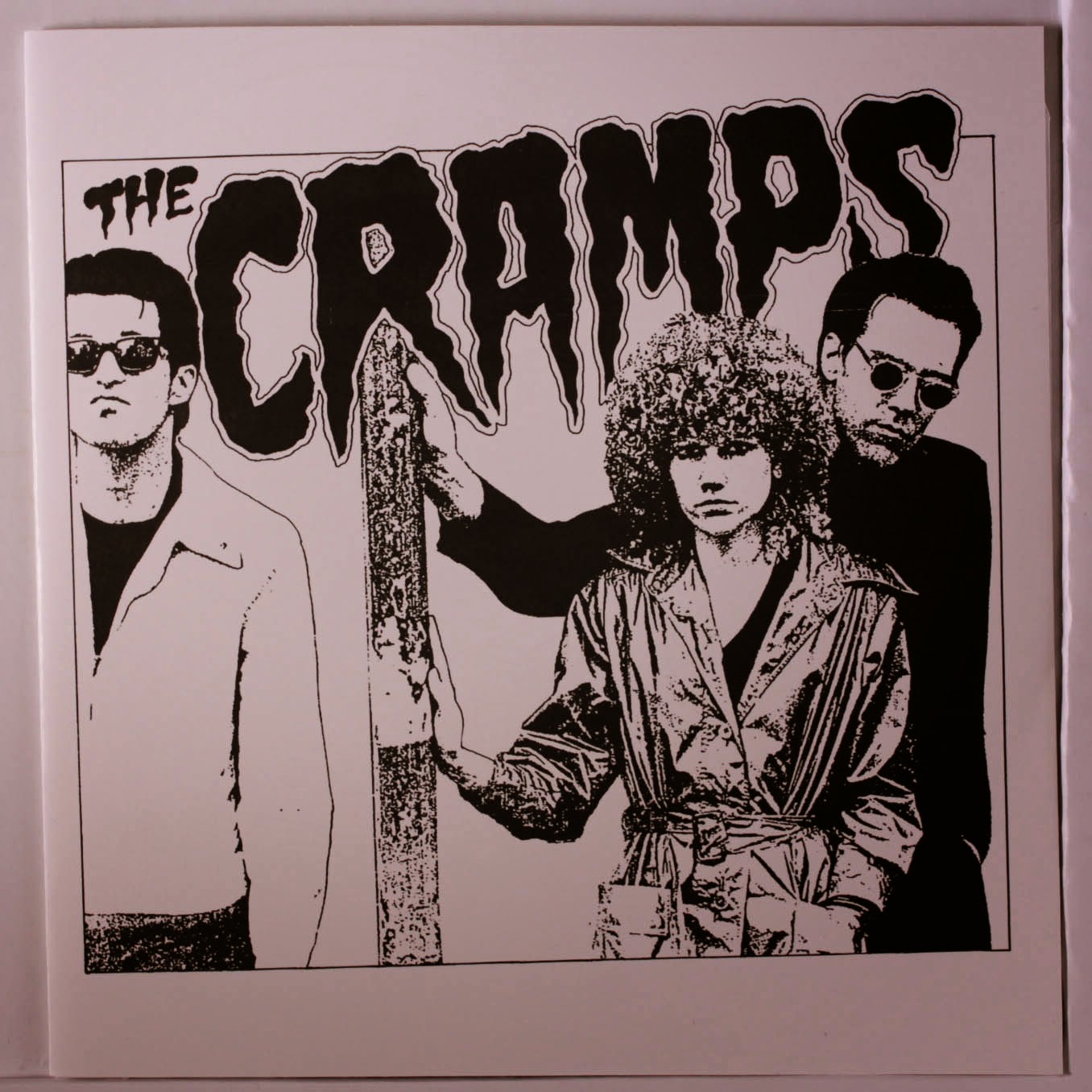 8) The Band That Time Forgot
Bootleggers sometines ' got good tapes ! ' (well, they rather probably get this on Dime).
This should have been an official single ! Soudntrack recording issued on February 2014, in the USA (I guess) as a (so called) limited edition in scarce opaque red vinyl.
This 33 RMP EP live at NY CBGB’s in August 1979 (probably 8th) features : The Band That Time Forgot / Twist And Shout / The Way I walk / Domino / Human Fly.
The cover sez that 'The Band That Time Forgot' was only played that night, but in fact, this song, based on the Collins Kids’ 'Whistle Bait' was also played by The Cramps one year before at The Showplace, Victory Gardens, August 18, 1978.

9) Live In MAPA State Mental Hospital 06-13-1978
This one should also have made it on an official release. Correct date is in fact June 16, 1978.
What we have here is half of this great Cramps show issued on VHS and DVD.
The Cramps had the idea to stop playing there while on  their way to Memphis.

The songs are : Mystery Plane / Tear It Up / What's Behind The Mask / Human Fly
This (correctly sounding) single has been issued in Greece in March 2013.
Dark Image Production label, transparent or black vinyl, limited to 50 copies (in total or each colour ?).

10) Live At The Fillmore, SF, CA, US
Well, this Spanish single hasn’t been issued under that name, but that’s the name I would have chosen if I was a bootlegger (not that I hate them but I got a few friends that do), and i wouldn’t have chosen that Cramps logo ...
Anyway, this was issued in Spain in May 2014. Blank label ; 100 copies on yellow vinyl and 130 black vinyl. The cover is the proof. 'My Flash On You' has been recorded (by me, I also wrote the liner note for this single) during one of The Cramps last shows – their 30th Anniversary – October 30, 2006 at the Fillmore, SF. Same place but a decade before, the B side features a rare version of 'Woodpecker Rock' (Nat Couty & The Braves).
The 'label' sent me a couple of x-tra copies that I hope I can give to Ivy one day.


Have fun tracking these babies down, some will be easier to find than others but even so they won't be cheap.....Thanks Pat,  happy hunting and stay sick !