Well, what a great way to round the year off ! A 2nd 7" from everyones favourite Russians 'Messer Chups' out on Germany's 'Copase Disques' and officially released in Jan 2015 but I can tell you that if you get over there sharpish www.copasetic.de you may be in luck to grab a pre-release copy (and they have copies of the 1st 7"  'Jokermobile' too, somewhat late as this was due out in Sept 2014 originally). Two tracks 'Rockin Zombie' and 'Dracula Hates Photoshoots' both of which were taken from 2013 album 'Church of Reverb' and both tracks produced by Jorge of Dr Explosion infamy. Needless to say that following on from the success that they've had this year in particular, these releases will be gone real quick....so you know what you need to do....get them here too deadbymonorecords.greedbag.com/messer-chups/

While you are over at Dead By Mono Records filling the aptly named 'Greedbag' full of goodies, you could do far worse than pre-ordering the latest vinyl offering 'Underpants Hop' from 'Leadfoot Tea'...you know the dude from 'Thee Gravemen' that does the onemanband thing and you may want to head over to Monster Mash records as well because they've just released the 2nd EP in the MonoBanda Bash series featuring a track from 'Stompin' Leadfoot Tea and as per usual both of these releases are ridiculously limited. Now...the only thing is that this little baby isn't being released until April....looks like the demand for vinyl has gone through the roof of late and there just aren't enough pressing plants to deal with the demand !


Now here's a thing....couple of years back I'd heard of a great Rockabilly band from Austin Tx called 'The Hoop 'n' Hollers....picked up the LP and a 7" (Sleazy Records, Spain), played it a few times and it was flavour of the month for about a week, before putting it away and kind of forgetting about them.....guess I must have been distracted because as it transpires, the frontman, one Almon Loos turns out to be something of a character and not unlike the one and only Bloodshot Bill, in that he sings and plays guitar, has his own line in male grooming, (Bill has his own brand of pomade) but he is a pretty dab hand with a pair of shears and a straight edge blade (cut-throat razor) too, though probably best to have Bill managing your BBQ rather than cutting your hair.
Sooooo, while I was over at 'Nothin But Trash' checking out the latest post by Mr Noon I was most pleasantly surprised to find a new EP (CD only) by a combo going under the moniker of 'Silvertooth Loos & The Witch'  called 'Swamp Stompin'.....
Looks like Mr Loos has relocated to L.A. and formed a new band, a quick couple of emails later confirms this and 'Wow' Yeah....a great release, you need to contact them through their facebook page to get it though (or head over to 'Nothin But Trash'). I found a very recent interview with Michelle Balanchi (The Witch) done for 'Rockabilly Bash' by Satu Pietarinen.

The Interview.
So purrrfect for Halloween that I got brilliant interview from Michelle aka Witch. Read how the swamp sound began and how the Witch became reality. Sometimes the truth is more stranger than fiction! They have Swamp Stompin EP out and there is more to come...

How did you and Almon meet eachother?
Almon and I met by being neighbors where we worked, him at his barbershop and me at my hair salon. I would walk by and we would always exchange flirty looks. We finally talked one day, then had drinks and the rest was history...Almon didn't really know I played until about a month later, when we went to Caveman Vintage (a music/guitar store in Downtown LA.) He expected me to strum a couple of simple chords, nothing special. I started playing some Dick Dale surf and tuned the guitar by ear and he was super impressed. I didn't know it was special, I just did what I like to do and he said that's it! We're starting a band!
I compose my own songs on the piano! My style on piano would be more like dramatic soundtrack pieces, maybe for movies, etc.
Do you play any other instrument besides guitar? 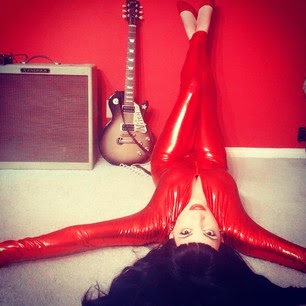 Why the name Witch?
Almon had always had the "vision" of Silvertooth Loos. Most of his close friends laugh and recall this. However he had a distant dream of a female lead guitar player being The Witch, but imagined that part was unrealistic. He had his character fully ready in his mind and he wanted to incorporate more blues and swampy, but still with a deep rockabilly influence. 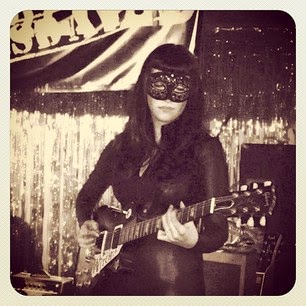 How you would describe the music you play?
First of all, our music comes straight from the heart and soul. Almon and I put together elements of all the sounds we like. I grew up listening to 60's rock n roll, garage and surf, and Almon got me into 50's rock n' roll, blues and rockabilly. So we sort of just put together all those that we liked. What came out of that was dirty, swampy, bluesy 50's rockabilly rock n' roll. If anybody enjoys old music, they would dig us.

What is Almon's strengths as musician and how do you think you compliment each other?
I think Almon is an incredibly talented musician and free spirit. He does whatever he feels and doesn't care what anybody thinks and that's what the audience loves about him. He's wild and crazy but isn't just a front man. We live together and I watch him come up with beautiful guitar arrangements that I could easily flow with and follow. He's very talented about bringing the right parts out of the song. He doesn't just stand there and strum, he pays attention to the way the music goes with the solo, the chorus and so on. He can come up with meaningful lyrics right there on the spot and I've never seen anybody do that before. He always feels what I'm going to do next and I feel what he's going to do to. It's so natural. That's why we've got 19 original songs within the short 7 months we've started this band! It's addicting to come up with songs together.

This is the first time I have ever officially been in a band. I've been playing since I was 6 and took lessons starting at age 8. Almon brought me out of my shell. I used to be shy until now. It's an unbelievably amazing experience being a female lead guitarist. It's so much fun, and the respect I have been getting and the compliments have been so encouraging. When I'm playing and coming up with ideas, I don't feel like I'm a girl playing guitar. I feel equal to the men around me, because with music, I feel like there is no gender. It also feels good, as a woman, to do something with integrity rather than allow myself to be simply an object or a pretty thing to look at without much use.

How is to be a female guitarist?
Things have taken off quickly yes. I practice 4-5 hours at least everyday and I am in love and obsessed with playing guitar. It comes from our heart and soul, and it's amazing how people from all over can feel that. I can speak for us all when I say the support and love from all our new and old friends and fans has been beyond amazing, encouraging and deeply appreciated. Those are the people who keep me and us going.

Things have progressed quick. How do you feel about that?
What are you good at, what is he good at?
I think Almon is good at handling the stage. He does alot at once, like moving around and entertaining the audience, singing and strumming at the right times. He also never loses his cool. He's very confident and believes in everything he does, while I'm still learning not to be shy. I believe from what our bandmates tell me that I am good at being original. My style is musical and I have alot of classical influence in the way I play from all my lessons as a child. I don't try to be anybody else but myself and I play straight from the heart. Also, if I'm sad or happy, somehow I take it all out of me and put it right into the guitar and song. Everyone can feel the sad songs and they all say they feel goosebumps. I thought it would be really tough, but actually, I couldn't have found a better in my life than this scene. All the musicians have been nothing but accepting, kind and supportive. Some want to come jam with me and us, which is incredibly flattering. I am always open to learning from other musicians, and I think they seem to appreciate that .

Future plans?
As for future plans, Almon has countless ideas. We are aiming for Europe again, as we went to Germany a few months ago and want to go again. We also really have our sights set for Japan. As for me, I am enjoying and loving what is happening. I have no expectations, which keeps things exciting. We plan to release our very first record in the next couple of months.

We have been getting alot of messages from France and Germany. We will be going to Germany in August for the Hoop n' Hollers and I will be making a guest appearance. How did you feel in Europe. Is the audience different in USA?: It was interesting in Europe. I feel like they really liked us, but didn't know how to feel about a female lead guitar player. Then again, we didn't have Ricky McCann on drums yet, or any drums, so I know the next time, it will be rocking!

Do you have gigs booked in Europe?
Have the musicians accepted you as one of them?
In the very beginning, I was very nervous around any new musicians because I felt like as a female lead guitarist, I had to step up and prove anybody wrong who thinks "Ahh she's just a girl, she wont be any good." However, I was so moved and impressed by all the positive feedback and compliments. Some of the biggest musicians who I felt intimidated by like Ashley Kingsman or Rip Carson were really supportive and complimentive. I used to choke up a bit when musicians Almon knew would come up near the stage and watch my fingers, but now when they do, I play with extra "fire" and it always goes well.
Big Thanks to Satu for the interview.

Have A Happy Rockin' Christmas !
Posted by Unknown at 19:08