The new album from that busy, busy Canadian 'Bloodshot Bill is out since Dec and it's a real humdinger ! The 3rd release for those cool folk at Norton....here's the thing though, I was on their site (can't recommend it enough if you live in the USA) putting my order together as they've also released the original version of Bobby Fullers classic 'I Fought the Law' and The Seeds 'Nightime Girl'as well as few other bits and pieces I fancied....go to checkout and hit the calculate shipping button and nearly pass out ! Looks like the US Postal service has decided to really ramp up the cost of sending stuff overseas....basically the cost of my order was doubled when you added the delivery charges.....Hit cancel order button ! and ordered from nearer to home. At the same time Norton released the album, they also put out a Christmas single from BB too, couple of original tracks called 'Stuffin' her stocking' & 'Naughty or Nice'  bit late now I know but thought it's worth the mention. This is album number 18 (Yep, eighteen albums, not including splits and other collaborations, he's also half of The Tandoori Knights & The Ding Dongs) and not a bad one yet ! Not only is he prolific but he's always doing something, he recently went on tour in the US with non other than Heavy Trash playing double bass and by all accounts will be doing so again very soon as they're on a French tour : 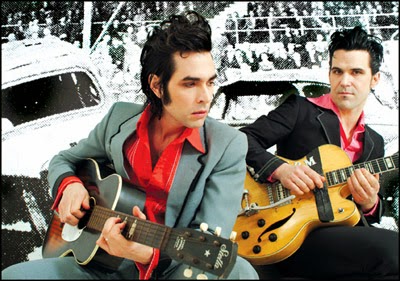 I've been wondering what happened to the new album from Heavy Trash which was due out late 2013/early 2014.....perhaps it'll be released shortly ?
Posted by Unknown at 16:44