Before you read any further just listen to this : https://www.youtube.com/watch?v=VpViacVDZWA

Why someone hasn't picked up on The Hillmans and put out a full length LP is beyond me, the above track sounds like it should have been on 'Songs The Lord Taught Us' and at the very least 'Swamp Devil' deserves a 7" release.....something like Mystery Plane with a demented Big Bopper on vocals.........seriously out there ! 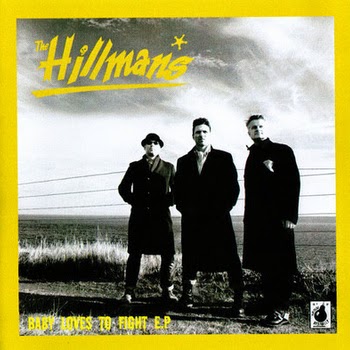 Clive (aka CC) Reeve, Chris Roskilly and Bob Hillman got together nearly 4 years ago (Dec 2010 although Chris and Bob had been playing in bands together since the mid 80's) with the idea of playing 'Old School, early 80's' style Psycho Rockabilly with a very, very heavy Cramps influence which comes across in all their recordings to date very well indeed. With 3 EPs under their belt so far, the debut from late 2011, 'My Baby Loves To Fight' captures perfectly what they're about.....much more 'The Orson Family' or early 'Raymen' (Germany) than the likes of contemporary bands like Tiger Army or Nekromantics (Thank god as I don't like either !) and there's even a little nod to Garbageman on 'Til I'm Outta Town' 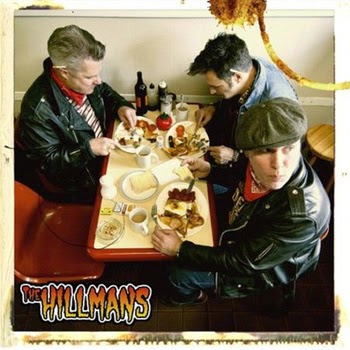 Their second offering, a 6 track mini album was released in Nov 2012 entitled 'Barn Dance Music For Plumbers' and has an early Rev Horton Heat vibe going on with what sounds like the bastard son of Lux and Hank Ray providing the vocals..Stand out tracks for me are 'Lazy Bones and 'Losing Touch With My Mind' but there isn't a bum track there so no worries.

Their 3rd outing, another 6 track mini album, is the fabulous 'Go Diddlo' released in October last year (2013) and contains the brilliant 'Swamp Devil' and 'C'mon Little Mama' which owes a great deal to 'Tear it Up'....no bad thing if you ask me !

Here's an extract from their bio.....
The Hillmans are a Rockabilly/Psychobilly/Garage trash band from somewhere in the 1980s.
Brought up on The Cramps, The Meteors, 60's garage and surf, 70's punk, Ford Cortinas, mopeds and Carry On films. Bob Hillman and Chris Oxide first met around 1984, playing in the "Sons of Morticia" and latterly "Belgranos Revenge" There's one rare recording that survives from this period, known as "The Anarchy in the Back Bedroom recordings".
Sir Clive Reeve, AKA CC Reeve, meantime was wreaking havoc around the Caterham area, where a lot of the original British Psychobilly originated from.
Scroll forward several years, with moves to Brighton, hair loss and domesticity looming, The Hillmans formed up in Dec 2010, with an idea to play the Psycho sound of the 1980's. Psychobilly has moved on, with faster and more furious bass slapping and a more punk & metal sound which is great (is it really ? me) but The Hillmans just wanted to take that step back to where the inspiration for current Psychobilly bands came from.

All their releases are available as downloads (until someone sensible puts them out on vinyl) from bandcamp here : https://thehillmans.bandcamp.com/

If you fancy catching them live which I would strongly recommend then you can add them or like them or whatever it is you do with the Facebook thingy here : https://www.facebook.com/TheHillmans
Upcoming live dates include:
12th October, Brightona, Madeira Drive, Brighton (Motorcycle show)

7th November, The Welly (Duke of Wellington) Shoreham
8th November, The Wedgewood Rooms, Pompey Rumble
Sat 13th December,The Green Door Store in Brighton.
Fri 19th December, Biggin Hill
as well as being on the bill for next years 'Bedlam Breakout' in Northampton on Friday the 13th March (2015).
They've even got a proper website : www.thehillmans.net

Anyways, I'll be there to see them in November along with The X-Men and All Cramped Up at the Pompey Rumble...........really am rather looking forward to it !