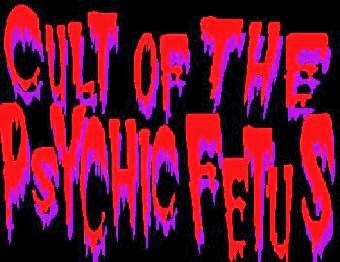 Something very strange in the waters of Ohio, not sure what it is, Radiation ? Pollution ? Elixir of the bizarre ?  but at the very least, to say that over the years this part of the world has spawned some wild and weird creatures is a serious understatement. Lux Intereior, and Nick Knox, Die Electric Eels, The Pagans, Pere Ubu, Stiv Bators & The Dead Boys, Devo. Not forgetting royalty in the form of Screaming Jay Hawkins no less. They all have their roots in either Akron or Cleveland..... 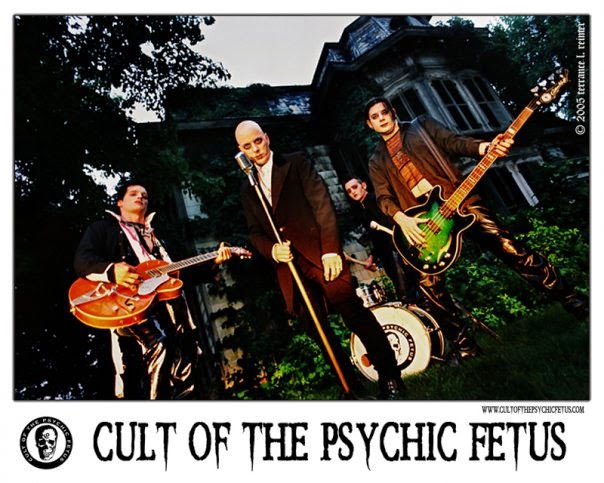 So it really shouldn't come as much of surprise that the CULT OF THE PSYCHIC FETUS tread these very same streets. Although they look like rejects from a Misfits tribute band fronted by a malnourished Uncle Fester, they play serious Surf & Cramps influenced Rockabilly...much, much more interesting than most of the US (predominantly Californian) bands that look as if they should be interesting and good, but deliver some form of  weird heavy metal, thrash which is so far removed from Rockabilly or Garage Punk that it should have it's own genre.....either that or I'm stuck in the mud holding up progress ?
So apart from a total obsession with the macabre, a look that wouldn't be out of place at a Danzig gig and a name that makes me think of some kind of Industrial Goth band. They actually deliver the goods spot on, Rockabilly riffs a plenty, loads of echo, Surf breaks and a driving beat mean you get a seriously cool sound. They describe themselves as 'Gothabilly' and I'm not going to argue against that looks wise, though I haven't heard any Goth band sound like this before.

"Totally over the top, they blend surf guitar with rockabilly rhythms. The sepulchral lyrics are sung a little too cheerily. The only way you could not appreciate their debut, Orgy of the Dead, is if you took the band more seriously than they take themselves.
It's cheesy, gloomy surf, and the band knows it. It's fun, and it's meant to be. Dead Bride is a good example. Picture gothed out muppets bopping around on the Muppet Show stage rockin' out to dissonant guitars and golden-oldies drumming.
Despite the psycho-billy leanings, the Cult is decidedly moderately paced, preferring fun romps to fast-paced killing sprees, something a zombie could shamble to."


And here's what New York's Street Beat had to say about them at the time:

"Ian Hunter once said, "Cleveland Rocks," and these boys seem to keep that torch burning. There's something about rockabilly meshed with horror or gothic overtones that is like, well, peanut butter and chocolate. It just goes together so well. And though at times the effect borders on novelty, the four boys do a bang up job. "Dead Bride" is a coffin-surfing delight, a driving number that has some great lyrics – "dead bride, room temperature thighs" – that'd have Norman Bates doing a Texas two step. Lead singer Reverend Doom and company may remind you a bit of the Cramps, but then again, all good Gothabilly will, and this stuff is good. If you hurry, you can buy a copy in time for your Halloween party. Boo!"

2000 saw the release of their 2nd album 'She Devil' along with a mini CD and a 7" single featuring the title track of the album...I have tried over the years to track down both the only piece of vinyl they released and the mini CD, which have proven impossible to get hold of (Anyone have them, let me know thanks). The MCD has an unavailable track 'Blue June' and apparently the 7" was pressed in both red and blue vinyl. I'm guessing there were problems with the label/record company as it looks as if it was never generally distributed.
According to reviews and general opinion, they are more of a live sensation than a studio band, going as far as recording their albums live to capture their 'true' sound.....Usual gripe from me here, there's no vinyl !

They toured extensively in the US but as far as I'm aware have never made it across to Europe. Often headlining at festivals, they've appeared on the bill at 'The Vampyre Ball' in New Orleans, The Psychobilly Luau,  New York Psychobilly Rumble and The Drop Dead Festival as well as doing the rounds at classic venues such as CBGB's..........
They also contributed tracks to a series of 'Gothabilly' compilations on Skully Records 'Wakin The Dead' worth tracking down as not only does it feature Cult Of The Psychic Fetus but 'Deadbolt' and 'Empress Of Fur' doing their classic 'Johnny Voodoo'........She reminds me of Betty Page...https://www.youtube.com/watch?v=d6FNVeB5H5A

Bit of a wait for the next album and the last one with Raven Music, was 2004's 'Funeral Home Sessions' which came out in a tin box ala PIL's 'Metal Box' and again, no disappointments and so if you do come across it....grab it !
Not a lot happening on the release front since then but if the rumour mills are to be believed ?  there's a new release due shortly by Rev Doom's new project,  'Shadow Parlour' (it's aready available to download but I don't really count digi-formats as proper releases) so go give it a listen on their facebook page over there.

Just right for your Halloween Hoedown !