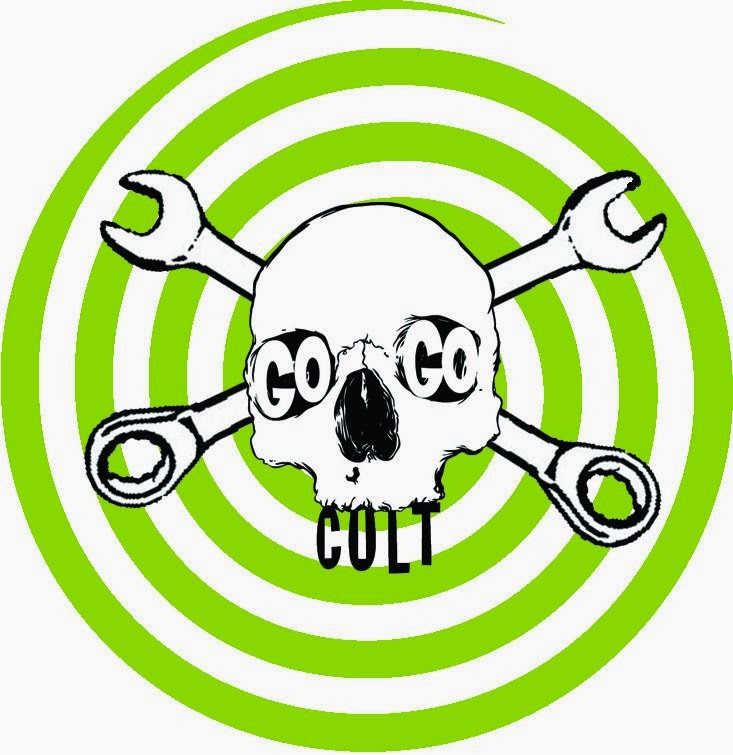 Hailing from Reading, The Go Go Cult have been knocking out their brand of sleazy, trashy 50's style voodoo. psycho-delic, surf punk (It's all in there !) since 2010. Their first album came out in 2012 on Bristol's Western Star Label, 'Into The Valley Of The Go Go Cult' and is an absolute killer, think The Tall Boys meet The Cult Of The Psychic Fetus meet the Cramps and you're not far off !

There really isn't a weak track on the album and they're all self penned originals, albeit with a few nods in the direction of the likes of Johnny Fortune (I'll Drive), Ghoultown (Devils Cowboy) and some superbe 'surfabilly' (Rocket to Neptune).....my only complaint being that it isn't out on vinyl, hopefully their label may cop on and see the error of their ways someday ?

Their second album, 'This Is The Voice Of'  only came out in June (2014), again on Western Star and again unfortunately, only on CD. It carries on in the same vein although the 'Rockabillyish' influences have been a little diluted, giving it a slightly more trashier, garage punk edge. 17 originals, no covers and to my ears, seriously good......although I'm not quite sure how they ended up on Western Star as they are most definitely not the usual fare released by the label which is run by Alan Wilson, formerly of the 80's Neo-rockabilly band 'The Sharks'................but glad they are all the same.

Go Go Nige and the boys will be back in the studio (Down the M4 to Bristol) during September and hopefully a lovely little slab of 7" wax will follow not too long after, but while we eagerly await that, you could do far worse than go see them, they've a few dates lined up too, so you can catch them at.
Flairz in Hastings on the 26th Sept 2014.
The Hope in Brighton on the 1st Nov 2014.
The Doghouse in Nottingham on the 7th Nov 2014.
Check their website (Click on the patent Hypno-wheel in the panel) and/or facebook thing for more dates, info etc.